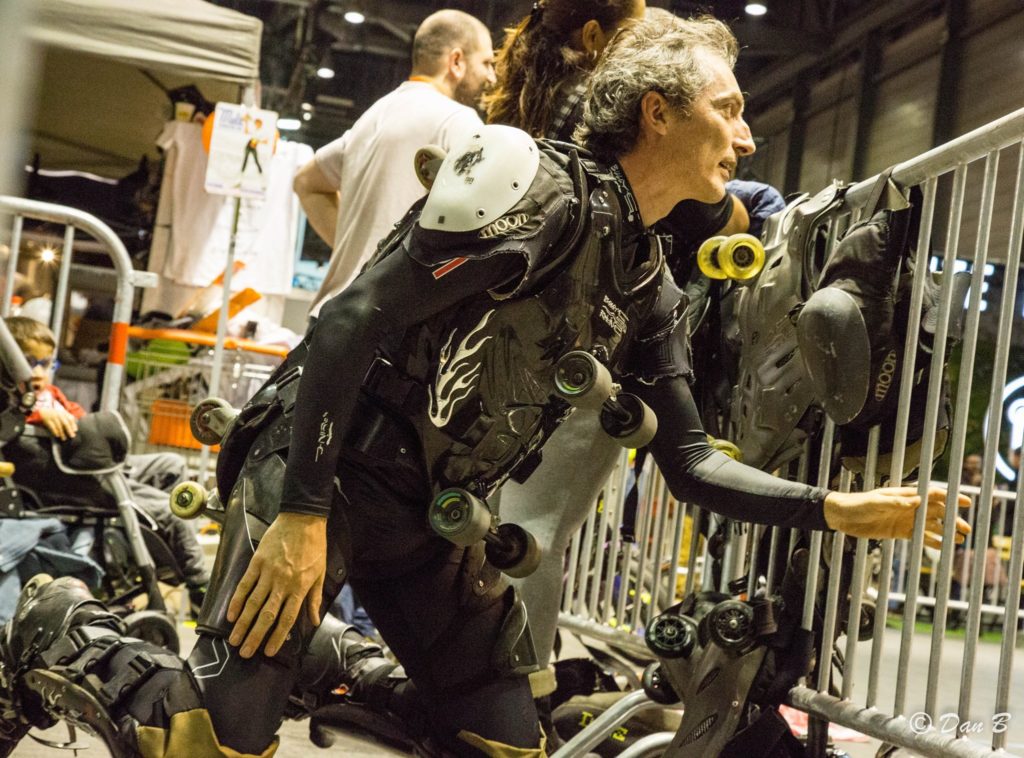 Automnales of Geneva is a fair in Swiss. Tous en roller TER association funded by David Dousse has for goal to promote skate. It organise events and in line skate courses. For the fair, he TER invited Jean Yves Blondeau with many BUGGY ROLLIN wheel suits, to show the skills by making shows and teach anyone who wish to learn BUGGY ROLLIN. Sebastien Bertholet “Otaku Rollin“, was also there to give BUGGY ROLLIN and skate lessons.

Otaku and Rollerman were busy all along the fair to welcome people, set the BUGGY ROLLIN armors to the bodies, and explain ow to use it.

This Automnales Geneva fair was a success because Jean Yves Rollerman had very small time to rest.

Here is The Rollerman at Cisterna d’Asti story.

Cisterna d’Asti is a small village perched on top of a hill from which the vineyards flow in a tight row. A castle oversees the village. and roads crisscross the vineyard by drawing curves on the side of the hill. it is therefore a pleasant place to spend a weekend of downhill with inline skates. Provided you respect the furnace time and cultivate the midday nap of midday.

The road starts steeply between the walls of the village, then laziness a little before joining the vines as if she was reluctant to go to work in the fields. Finally she finished at high speed in the plain just next to the wine cooperative. It was time to get there!

So it’s an Italian race, where you have to push hard on the boards. A pretty walk in the vineyards, and a charming population at night on foot from the castle.

The 3 photos of Rollerman at Cisterna d’Asti

Schedule of the training camp 2015

The 2015 Training Camp started in Aix Les Bains. We ended up at the park of the green theater with a beautiful troop of downhill skaters. Switzerland was well represented with Yvon Labarthe and his wife Anna, David Dousse, Sebastien Bertholet “Otaku Rollin“. In the French team we had Christophe Andreatta “Riderman“, Anthony Finocchiaro “Finch” and Jean Yves Blondeau “Rollerman”. This first phase of training is open to beginners. It allows to discover the bases of the BUGGY ROLLIN in a suitable frame.

The program of the discovery stage of 2015 Training Camp.

First you have to dress everyone and adjust each armor. Then we can start a little theoretical course that sets the basics. We learn to lie down, get up, roll on our knees, use the arms, turn and brake. This allows everyone at the end of the course to get by, and start having fun riding. At the end of this first class, students can begin to take a bit of speed downhill. this is necessary for the next stages of the 2015 Training Camp, which will progress in difficulty and speed. Jean Yves is there to supervise the course. He is helped by those with an advanced level like Sebastien Bertholet and Christophe Andreatta.

Second step of 2015 training camp at the Col de l’Epine.

The second phase of the 2015 Training Camp consists of going on more sloping and committed routes. Here beginners are no longer accepted without having first spent the first stage at the park. We are indeed on mountain roads that propel armor at speeds where it is imperative to know how to navigate and brake.

She right place to practice

The Col de l’Epine in Savoie, is among the favorites for the practice of BUGGY ROLLIN, out of holiday period, it is little borrowed. It has a floor of excellent quality. It has an interesting profile that surfs between rock and cliff.
One of the important rules of security is knowing how to listen to each other. Sebastien Bertholet made the right choice by refraining from riding on a road where he is uncomfortable. The role of the team is not to encourage them to progress at all costs, but to support them in their decisions. It’s pretty hard to see your classmates having fun and stay back without regret.

Not having been allowed to return to the bob de la Plagne track (thank you, Mr. Mayor), we had to go abroad to train on the bob track. We are French sportsman, creator of new activities, and can not use the facilities that our taxes have paid, while we have proven ourselves in terms of security. We were able to show that the BUGGY ROLLIN armor protects, and does not make a problem in the bob track.

It is thanks to kindness Stephano Bompard that the doors of the Olympic track of Cesana were opened to us. It’s a unique track in his drawing. It turns into polygons. Therefore it imposes a very special rhythm. It is therefore important to be able to discover it, and tame it.
But as there seems to be a curse on the bob tracks, the track has an uncertain future. Chances are she will disappear.

The only picture of 2015 Training Camp @ Cesana