First the Tv crew came to the home fo Jean Yves Blondeau, discovering the cave and the workshop where the BUGGY ROLLIN suits are build. Then they went to city park of Aix les Bains to make the TV presenter try the suit. He could happily succeed to get the skill to make level 2 downhill. and at the end they went to a real mountain downhill at le margeriaz where WoodWings was having downhill camp.

At WodWings camp Rollerman could meet longboard friends . Here is the video.

Sometimes it is good to go BUGGY ROLIN with friends. For Fun and for friendship Herve and Ksenjia did BUGGY ROLLIN at Aix les bains.

Herve and Ksenjia are both athletes that used to go in competition around the world. According to that, trying the BUGGY ROLLIN wheel suit together was easy for them. Furthermore practicing a fun sport effortless brings only happiness.

Even if Ksenjia stopped to skate for competition she skates for teaching. Thus she trains crossfit weightlifting and plans to go triathlon. So being tired of exercice was not her problem. Maybe that one reason why they could laugh a lot.

What a complicity between this two lovers in buggy rollin, we hope that it will make you smile as much as us.

In order to complete a report for school work, a pair of Children visit BUGGY ROLLIN home. They came with sisters because every one was very curious.

First they visited the workshop. There they could see how some tools are working. They cold also understand how some parts are assembled.

Second the group went to the office. that is the place where every thing is designed and videos are edited.

After asking many questions, Jean Yves proposed them to wear BUGGY rollin suit. They laughed a lot and were very excited. Only the mother did not ask to try the armor. “But i would have tried the armor with pleasure” she tells us later … 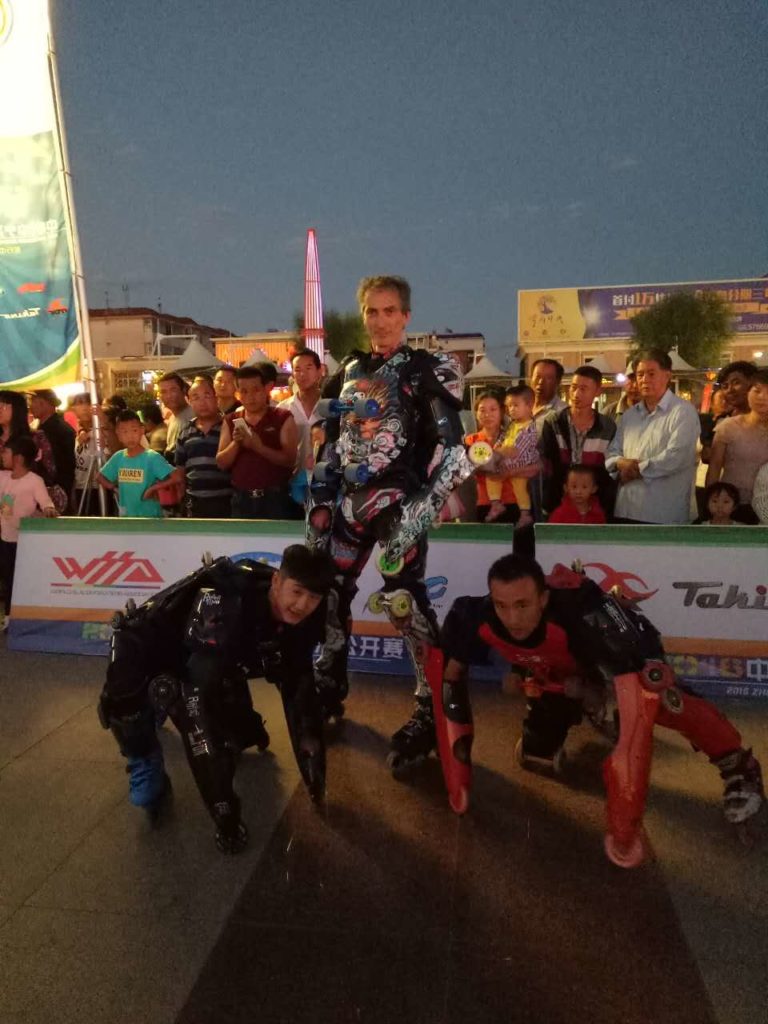 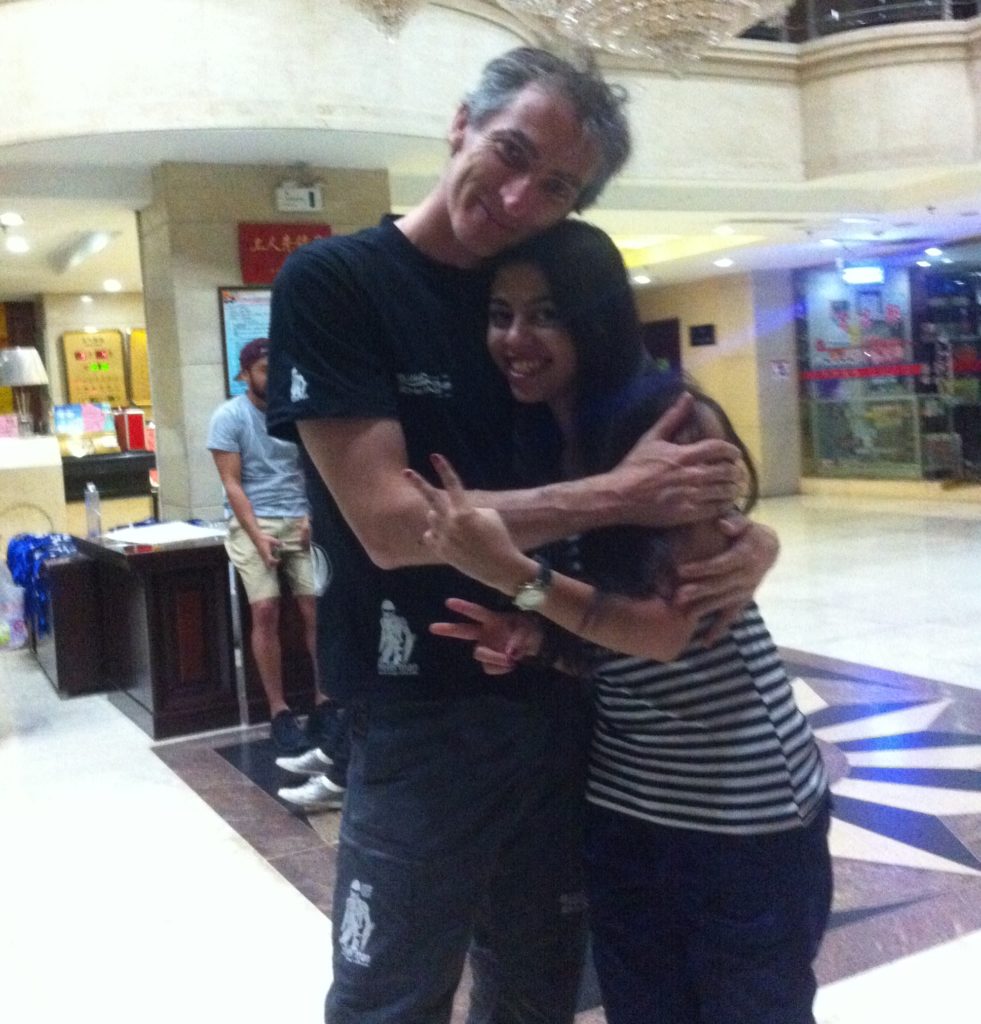 For the second time, goes Rollerman at Xichang 2016. With happiness and expectation, this is another emotional travel.

A new Rollerman at Xichang 2016

Xiao long was receiving his brand new Orange BUGGY ROLLIN follows at XiChang. It was nice to have training together with Jean Yves during the long hours of competition.

The biggest expectation for Jean Yves Blondeau to come to Xichang is to meet his friends again. The first days he was not able to contact them. But as soon as he could get together again, the Sunny sun shine came back. Best fixer, Sunny bring back his friends with him. Robin was able to run on the side of Jean Yves as he was going down the streets of old XiChang with BUGGY ROLLIN suit. Miss Trump always carry good mood. Mr Bear keep fidelity. BinBin the cousin is always curious.

firstly we spent time near the QiongHai lake. Then we visited the sloppy old city. We went outside the city to ErWu in order to find long perfect floor downhill. and finally we went to fire festival. Fire festival is a very special cultural event of XiChang. It goes only for a pair of hours. It transform completely the city. No word can clearly explain. just go and experiment it.

Thanks to Sunny and his friends we could secure the cross roads of old city in the purpose of making fast video in narrow streets. Also they made possible to escape the center of the city and film with BUGGY ROLLIN around. there is so much more to film in they area.

Pictures of Rollerman at Xichang 2016

Meeting the beautiful dancer was maybe one of the most beautiful present to receive in XiChang. 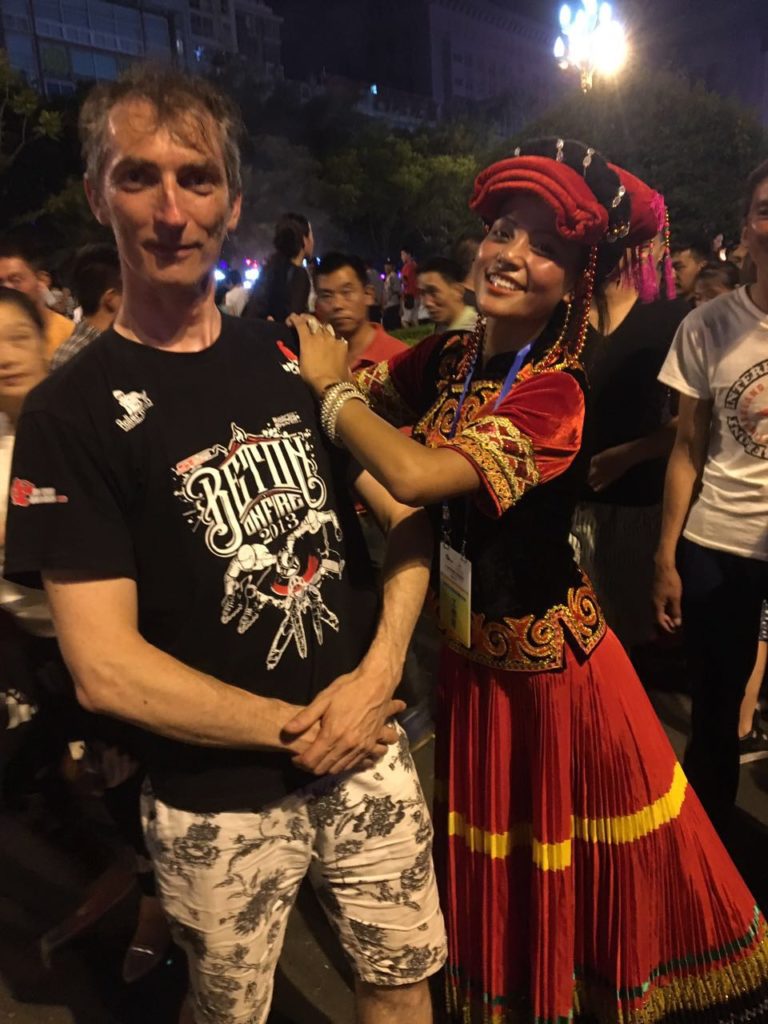 During two dances a magic complicity immediately crystallized between her two people. During the festival, the fire burns hearts. Even though he is fiery and ephemeral, his bite stays a long time.

Nor should we forget this ceremony of the The which was a mythical and magical experience. The magic tea drunk under the conditions of concentration and favorable breathing is a gateway to the breath of the dragon. If you want to know more, write to us!

Video of Rollerman at Xichang 2016

For the first time in the world Jean Yves Blondeau bring a suit with Ice Blades in bob track. Rollerman on ice at Sigulda is another epic adventure. Designing the blades, chose a metal, make them cutting by laser Jean Yves had to work in a very short window. Then he had to update the prototype in order to fix some ice vibration issues. After proposing solution Jean Yves Blondeau made tests in ice hall. The next days he jumped on the ice of the Bob Track .

Création comes by work . In every thing making progress is making effort. So stepping on the ice was not easy. And there is still a lot of work to do.

Pictures of Rollerman on ice at Sigulda

Video of Rollerman on ice at Sigulda

2016 was the year of the most beautiful show of Rollerman at Shanghai and Lishui. In Shanghai Jean Yves Blondeau and his “9 Dragons” BUGGY ROLLIN wheel suit had show at the opening ceremony competition and also at the in line skate dance competition at people square in the center of the city.

Pictures of Rollerman at Shanghai and Lishui 2016

video of Rollerman at Shanghai and Lishui

Jean Yves Blondeau came as Rollerman at Wuhan to make show in Happy Valley. There was a freestyle competition. It is the third time that Jean Yves make show in happy valley. Happy Valleys are leisure parc like Disney land For China.

Art connection with Rollerman at Wuhan

This time the volunteers came from an art school. It consequently made a direct connection with Jean Yves who loves art. So friendship came instantly. Among the volunteers Milou pop her personality up.

Not only Jean Yves made show on stage for slalom competition, he also made parade with all the skaters in the parc. At the end,  they made a big dance show on central stage.

some pictures of Rollerman at Wuhan.

Jean Yves Blondeau and Danny Strasser decided to go BUGGY SKI at Lech Austria, in order to make BUGGY SKI video. Since Danny never made any BUGGY SKI video it was a need to do so, and perhaps get as much success as the famous SWISS PASS film.

The weather was nice. But the snow was melting too soft and heavy . So it was difficult to ride BUGGY SKI.

Pictures of BUGGY SKI at Lech

Rollerman at 24 hours of le Mans Roller. He made show in the village, ran the parade with BUGGY ROLLIN wheel suit. And during the night he made some show at the stands to cheer the riders up.

There is a long time that Jean Yves Blondeau was not invited on speed skate event. we went in several marathons in Germany and Lyon. Reconnecting the speed skater friends is great. Specially when many old downhill skaters build speed teams. So it was a bit like a lost family meeting.