Where does the BUGGY ROLLIN idea come from? 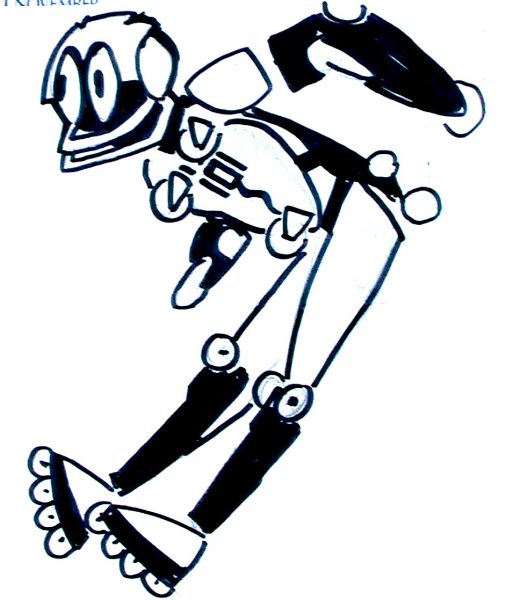 (here is one link to Jean Yves Blondeau profile )

NO, Jean-Yves did not wake up one morning and said:

Sorry, but the BUGGY ROLLIN idea came after a long process.

Maybe it started with Paul Blondeau (Jean Yves’ father) competing in the Jury as a ski jumper. It was just after the second world war. The ski equipment was reserved for well-off people. He was not. But he was resourceful and handy. So he made his own skis. He also built his tractor to work in the fields and the forest.
He married Micheline Pagnier, and together they had 7 children. He could not find the ideal toy for his 6 boys. So he built it. He got a series of beautiful toys. Thus, was created the family culture: if there is need of something, that it is not possible to find or to buy, then it is necessary to build it oneself.

All the children did it. And Jean-Yves the youngest, did it too. He did his own BMX, did his own monoski, did his own skateboarding, did his own roller skating as his older brothers did. It has not always worked! But it’s a good way to learn. And all the brothers went skating, cycling, skiing and trying everything they could imagine. So, in the ’70s, when they saw the first skateboard images, they built their own skateboard before it came to the stores. In the 80s, when we saw rollers on television, his brother François bought unsold skateboards and built rollers before it was possible to buy some.

So, can you picture this ? There were already inventors in the family.

Micheline Pagnier brought artistic fantasy. She loves painting and color. Thus, Paul’s toys were tastefully colored. Their sons went to study mechanics, industrial design, architecture, photography, sculpture, the fine arts … Seeing the technical drawings at home, of his brother who was actually working in a fire truck company, Jean Yves decided to learn the industrial design. And by the way he decided to draw every thing seeing from side with ruler and compass. (but without compass)

It was the same story in the family … A cousin, Philippe Roux, invented a toy with wheels that was produced in series Charton under the name of funny roller. It was nice to see that a drawing could turn into a product.

At the Ecole ENSAAMA Olivier de Serres, he was able to design anything; Vehicle Lighting Fixture Furniture Packaging Current Products … But for his degree project, he wanted to build really new. something that did not exist yet.

The problem with things that do not exist is that no one yet knows what it is. So someone has to look for it. And someone has to think how to look. And or? Jean-Yves loved skating, dancing, moving, running, creating, filming, accelerating … So, he understood that he wanted to create something that deals with balancing body sensation, and locomotion.

The official title of the thesis was:

It was the theme. But then, where to look?

Know the body first. how does one perceive sensations?

Jean Yves studied neuro-anatomy, how the sensations of movement, called proprioceptive sensations, how they circulate in the inner ear, how important is the sight, how are they treated by the brain … That was fascinating!

How do we perceive speed and space?

NASA before sending someone into space did a lot of experience on this because they were afraid that the human body would lose its references and that the cosmonauts would go crazy. They discovered a lot of key information! For example, the perception of speed is given by the periphery of the eyes. Later, when we need Buggy Rollin helmet, we will take care to have the biggest field of vision. It will feed the brain with more sensations of speed and more information on the trajectory!

Understand why act while taking risks?

Risk behaviors. Jean Yves wanted to understand why young and teens loved speed and extreme sports. It’s not just about adrenaline. He discovered that other people have also studied. Such as the French specialist, David Lebreton, professor in sociology. It has shown that teens have risky behavior because they need to give meaning to their lives. In ancient times and in all primitive traditions, adolescents had to undergo an initiation ritual to become adults. During these rituals, the teenager has to deal with death. To face death is to value life. It was a revelation! – The sociology of the body.
David Lebreton also showed how we use the body to take a place in society. And in another study, he showed that sport can act as a culture that transcends boundaries with specific behaviors, language, organization, dress codes, literature, music, and individuals build identity .

Analyzing the past helps not to commit the mistakes that others have made. Mapping the existing in order to define the limits of the products actules. Analyze and understand boundaries. And when the limit is known, it is possible to look beyond, it is possible to find empty spaces where nobody ‘has ever gone. it means that it is possible to create new things.

The world of sensations.

The best is to ask someone who lives with and through these feelings. It can be professional athletes, pilots, Artists. So Jean Yves went to interview the best in their field. He started with Mayor Caroline Verchere, a red-haired trapeze artist. She showed him that the sensations are not the ones you think. On her trapeze, she felt free! she never wanted to go down, she wanted to throw herself into the audience! It upset the way of seeing things.

After collecting information for six months, the existing map showed some interesting possibilities. It was time to be creative, He put everything he learned before into the desins. This is the moment when a little woman appeared somewhere on paper. She was very small. Maybe less than 2cm. This tiny little lady was rolling on her belly, she was holding sticks with wheels at the end, and had wheels at the tips of her little feet. She met other ideas on paper. All together, they showed that it was possible to ride in all positions. That’s it !

Roll in all positions!

And again we had to ask ourselves the questions:

how many wheels?
or position the wheels?
how to fix them?
how to maintain them in positions on the body?
Then it’s a design work, bring the project into reality.
after two months the first prototype was born.