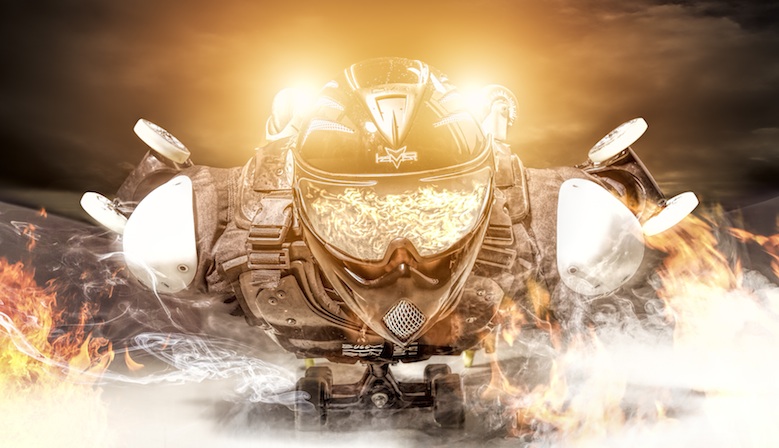 it is a competition based on the friendship and reunion of the freestyle skater family athletes around the Korean culture. All athletes are housed in the same place, in the hotels that send a part of the shadow of Korean life: cheap love hotel. This makes it possible to house everyone at a lower cost, and turn the building into a holiday camp. In the evening we often see ourselves setting the dinner  by making a huge table in front of the entrance for every one at once, and this often ends with a dance contest, or an improvised good-natured party.

Kevin Koo used to invite BUGGY ROLLIN Rollerman Jean Yves Blondeau to perform Rollerman shows in china 2014 on Shanghai open Freestyle competition WSO .
There were two places for skating. the biggest part of competition is in door. That is very good because the weather in shanghai is often very wet and too warm.
the second place of skating was the opening ceremony on the bund near the river. This is an outstanding pace for event.

The time taken with Anthony has been beneficial. Even if we were arrested. Indeed, Anthony understood who were the important gestures to master the armor he just received.

You have to be more discreet.

Next time we do not stay in the village. We remain discreet and suckers nobody, especially not the police. Even if the latter, was very correct, even nice.

BUGGY SKI Montalbert 2014 photo shooting of jean Yves Blondeau wearing a suit with ski that allow to ski in all position. Photographed by Christophe Lebedinsky who has the best professional collection of BUGY ROLLIN picture in the world.
It is always a pleasure efficient work with Christophe Lebedinsky. We were lucky to have one more time perfect weather condition, and thanks to Montalbert tourist bureau we are welcomed. Thus Montalbert has many activities around alternatives glide sport.

The video of BUGGY SKI Montalbert 2014

Jean Yves was contacted by a Swedish TV to make two Beautiful Swedish girls in BUGGY ROLLIN. Girls travel the world and show the interesting things in a given geographical area. Nor are they afraid to try things by themselves.

So it was on a beautiful spring day that the Swedish TV crew, Jean Yves Blondeau and Otaku Rollin found themselves at the green theater of Aix les Bains with 5 armor armor BUGGY ROLLIN. This park is an ideal place to start and progress. There have been many TV shows.

With the help of Sebastien Bertholet (Otaku Rollin), Jean Yves took care of the Beautiful Swedish girls in BUGGY ROLLIN with seriousness and professionalism. They have been able to discover new sensations of sliding and carry out their recording in time. We could not recover the video.

Beautiful conditions to take pictures at Lake of Bourget

Kyung Ae, Jean Yves blondeau, went with Christophe Lebedinsky, the favorite photographer of Jean Yves to have a photo session at the Bourget Lake. The lake is not far from the house of Jean Yves. It is a beautiful place. The light is winter, but the sun is there to reveal the colors of blue and pink BUGGY ROLLIN armor.

We had the visit of a local journalist alerted by passersby. He had an insistent way of imposing himself during the shooting. It is nevertheless with pleasure that Jean Yves lent himself to the impromptu interview. The article appeared in the newspaper Le Dauphine immediately after. We can say that the journalist did a good job.

Here are the Photos at Lac du Bourget

It is said that the small people, the magic beings, have been pushed away from west country of europe by too much industrialization and noisy mechanic farming. They refugee in east part of europe. Around the track the forest itself and the houses are breathing this magic flair, where the small people are still living. That is why we call this trac cary tale.

we went there after the altenberg race with Danny Strasser and Sven von Schlarta. Sven was the photograph. Thanks to him we have these beautiful pictures.

Unfortunately the track was under repair. Indeed every year they try to improve it. The wood parts are been replaced section by section by concrete. That is the reason why you will not see Jean Yves Blondeau rolling the track entirely. 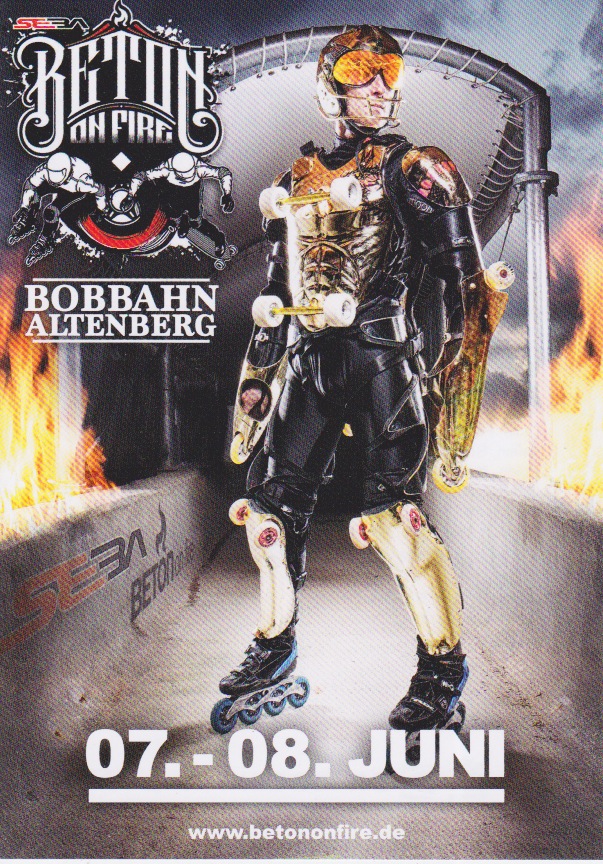 It was a great weather in Altenberg 2014. For the first time, we had three armored athletes engaged in the race. There was Otaku Rollin from Switzerland, Anthony Finch from Spain, and Jean Yves Blondeau from somewhere in the Universe. It was the first time that we could record the sleeves of each participant to see in the videos. in the evening we were able to train in the gym. Another night, instead of staying at home, we went for a free run in the neighboring village of Czechia. But this is a next article.

Enjoying the weather Jean Yves Blondeau (rollerman) left the tower. The starting tower measures 12metres high. The track has a slope of 47%. So It is impossible to walk on foot. altogether it is very impressive, because the slope appears as a wall. from above one can see Dresden 35 km. Jean Yves waits for the signal that the track is cleared, then it disappears at the bottom of the hut. and all of a sudden he takes his momentum. He goes off to the bottom of the back wall. He runs blindly, and throws himself into the void of the slope of the tower. LA, it is catapulted to 60 km / h in the track. He flies like a plane until the arrival.

Altenberg 2014 manches of the  concurents.

Quintal Is one of the beloved place to downhill practice BUGGY ROLLIN. Consequently to the nature of the profile of the road, it is an interesting place. It goes on three steps.

For climax of the 20 Years BUGGY ROLLIN, we got private training time in La Plagne Bob track. The students went first as Jean Yves Blondeau was the coach on the side of the track. He could see the progression of the students, and help them increase their abilities.

Then it was the turn of Jean Yves to ride the track with his black tiger and dragon BUGGY ROLLIN wheel suit.

Rolling in the streets of Chambery, with Three BUGGY ROLLIN armors was in fact a world premiere. There were three modern knights. Otaku Rollin from Swiss, Riderman France, and rollerman Jean Yves Blondeau. It was also a an action that revives the origins of armor in the western world. A pilgrimage to the heart of a major historic city of the Middle Ages. A place where we can cross a sci-fi sport, which is the BUGGY ROLLIN, and the stones over 400 years old. Each stone witnessed thousands of lives. And we pass through the small corridors like the water in the stream and the time over the planet.