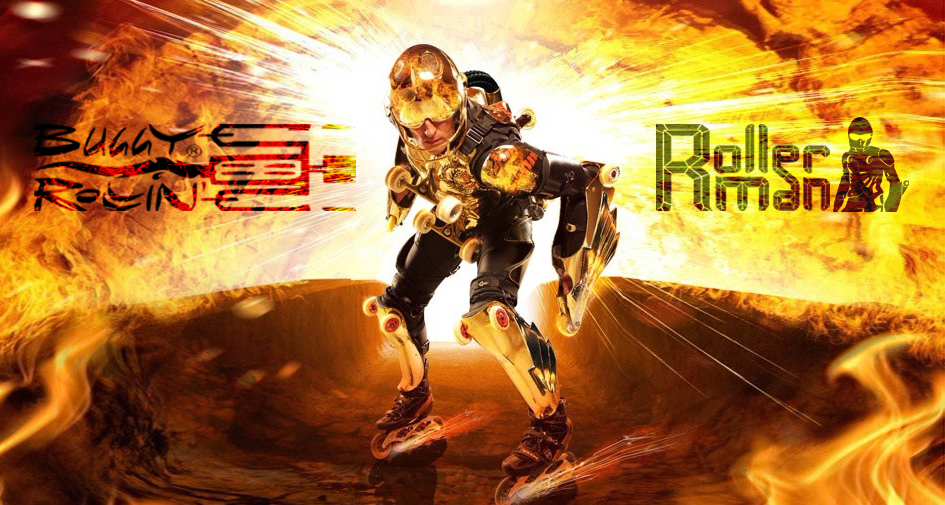 The Beton On Fire of La Plagne 2013 is the sequel to 2012 and 1998. As a Phoenix returned to life after the fire, the brand Beton on Fire was launched by Philipp Auerswald. This is a championship of several speed races in skating, skateboard and BUGGY ROLLIN downhill, in the bob tracks, without ice even concrete, or speeds reached exceed 100km / h, and pressures in turns with peaks at 4G (other times the weight of the body) allow to pass more than the vertical cornering. If the first animation had been festive, this second edition was in bloom. Indeed the organization was lapped, the teams of volunteers at the point and efficient.

On the side of athletes everyone is prepared physically and mentally to be cool technically available to the point, and powerful enough to face the constraints of the track.
The equipment must be in perfect condition before entering the track. All bolts, axles and wheels must be checked before starting. Because then the consequences are immediate.

Thanks to a good display spread, and the service of a super hero graphics, the event was attractive, and many people found themselves on the edges of the track to meet the gladiators on wheels. Friends of the valley came with their children creating nice moments. Good weather, sharing emotions, and accessibility of athletes, are the keys to a successful event, and it was the case.

BUGGY ROLLIN is a protective armor.

First, it is important to note that the BUGGY ROLLIN armor has an important protection function. The BUGGY ROLLIN is made up of a hull of composite materials sandwiched with protections that cover the entire body. We were able to see after the incidents that could happen on the bob track, that the armor had to protect the bodies of the athletes. Most of the time they can leave without a scratch, but with a big fright. The material can be scraped, scratched, sanded, torn, shredded before the skin comes to touch the roughness of the concrete. There remains the shocks of the blows and the effect washing machine in brutal concrete. It may be that the elements do not hold up on the body with repeated shocks, like a helmet that would be poorly attached and flying at first shock, but this is rare. We say this to recall that, despite the protective effect of armor, risks and dangers exist. There is inside the BUGGY ROLLIN a living being who must first use his intelligence to protect himself.
When it goes wrong the sensations and the speed are so strong in bob track, that we believe that we will die. But we do not go on the bob track to hurt ourselves. On the contrary, we are going on a bob ride in BUGGY ROLLIN to have fun.

Secondly, it is good to specify, that the discovery of the descent on the bob track is done in a progressive way. One begins by learning to master the BUGGY ROLLIN armor flat off the track, though, the skills required for the track are minimal. Indeed there is no need to know how to brake, or know how to make sharp turns. To begin with, you just have to know how to move, and get up.

Must learn the track.

The second step is to go on the trail to see, understand and learn traps and trajectories. Finally we start with the end. We try the last turns. We evaluate the difficulties and the possibility of progress, and if the conditions are good we start from a little higher. And so on. If you do not feel well you can start from below, or take a break, or stop. The idea is to progress by listening and his body, his conscience, and the advice of his coach, and enjoy the torrent of information that fuse the brain to make good feelings.

With speeds close to 100km / h, compressions at four times its weight, jet engine noise, vibrations to disassemble everything, we can say that the descent in BUGGY ROLLIN bob track generates thrills. It feels like being compressed in the armor on the walls. The perception of the horizontal is distorted. It’s like in the back of a bathtub, a giant slide, a water amusement park whose kinesthetic sensations are multiplied by four. This is the most impressive thing to do in BUGGY ROLLIN armor.

Riding the bob track is a commitment

The downhill bob is a contract the hard way. We do not stop in the middle. It is not possible in normal condition. Unless there has been an incident, the premature end of the contract is then paid the price. When we start we go all the way. The choice of the height of the departure is thus strategic: it conditions the hardness of the effort in front of the pressures, the general speed, and the duration of the effort. to start low is to start carefully, it’s the only way to get to know each other and know the track.

The peculiarities of The Beton On Fire of La Plagne 2013.

In the Bob track of La Plagne, as in all the others, the choice of the starting height influences the whole course of the track and its sensations. During the 2013 Beton on Fire competition, the majority of the athletes start from the top lady. This is a start before Turn 6. It allows you to use 80% of the runway’s potential. It has the advantage of diving directly into turn 6 which is particular. Indeed, the turn 6 said curve to PIC PIC, has a fairly tight radius and a steep gradient. In other words, he turns twice. When you are in it, with speed, you have to turn AND dive. Immediately after we go on with labyrinths 7-8-9 which have a high acceleration potential that give a first compression in turn 10.

The rest of the track if it may seem boring and slow is the part where the slide is the most important. You have to know how to keep your speed, stay dynamic until the end.

The public had the opportunity to book test slots, courses accompanied by Jean Yves at the edge of the track, and for journalists to try in the track on the lower part. Success was at the rendezvous, with good mood. The kindness, the attention and the availability of Jean Yves Blondeau make each lesson a special moment. Feedback from students is always very encouraging. Jean Yves did not have a minute to answer the requests of the curious who wanted to try.

Video as in the cinema.

With the exchange of memory cards between the various producers of videos, Danny Strasser, Anthony Finch, Jean Yves and friends present, We were able to edit a video with multiple points of view, with onboard cameras pointing to the front, on the back, shifted on the side, at the edge of the track, in the track, from the public, which added to the music of Calibro 35 make a movie-like clip. We regret that Calibro 35 did not deign to respond to our request for music use for now, but hopefully they will someday … maybe.